I was regarded a devil when I began ministering -Prophetess Kebila 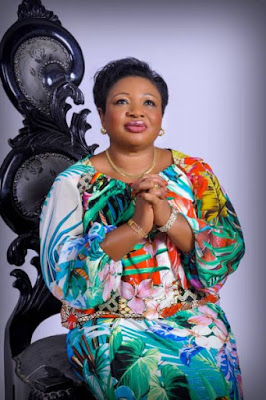 Cameroonian Prophetess Deborah Kebila, a.k.a the Eagle Mother has revealed how she was initially rejected as an abomination, a Jezebel and devil, when she started ministering in 2003.

Deborah who is the founder and general supervisor of the KING OF KINGS CITY based in Yaoundé Cameroon told her story on Saturday, according to a report by Church Gist.

But she said she weathered through all by the grace of God.

I came to know the Lord some twenty-five years ago and I have been in faithful service to the Lord since 2003.

Back then in my early years of ministry, the call of the woman as a minister of God, and preacher of the word was not recognised or accepted.

Women who dared to accept the call of God were considered an abomination to the kingdom by fellow believers.

In my early years of ministry, after I preached on a certain gospel radio, I stepped into my car and joined my protocol who had been listening to me through the radio in the car. The man of God to preach after me came up on the radio, changed his message and began to attack the ministry of the woman. I was perplexed.

On another occasion, I was invited to minister at a conference in 2004, as guest minister. I was supposed to take the first ministration and then another man of God was to take the second. As I stood up to minister, male ministers took their wives and asked them to leave the church. This was not a speculation. They were not sitting very far and were not quiet about their opinions. protocol followed after to ask and I overheard them say ‘they cannot sit under a woman’s ministration’. Enquiring later on, I confirmed this was their issue. I was called all sorts of name for daring to embrace my calling.

Even the pastor who invited me was criticised for not being in the faith anymore and for backsliding . They said if they knew it was a woman, they would not have come. They said any woman who preaches is diabolic.

During one of his ministerial missions to Cameroon, Evangelist Reinhard Bonke was asked a question on if a woman is permitted to carry out ministerial functions or preach or carry out any work in church as far as the ministration of the gospel is concerned. He said the work of the gospel has to do with rescuing humanity. He said that when a man is drowning and needs help, he doesn’t look at the gender of the man stretched to help him come out of the water. In other words to him there was no point on knowing whether a woman should preach or not preach, because what matters is that people should be saved whether the gospel is brought by a man or woman the word is same, because we are not preaching on our behalf but on behalf of the Lord.

That’s how Bonke managed to solve the issue during that mission and after that time, things seemed better. That’s how the Zeal of the Lord in me found place.From that time, the ministry started growing and my calling found expression. If God didn’t want a woman to preach he wouldn’t endow the woman with power from on high. At the upper room, Jesus told them to wait to be endowed with power from on High, there were also women in waiting.

More obstacles have come up even within ministry positions, obstacles arise in every family but God’s grace has helped me affect many lives and give birth to many sons and daughters. By His grace, I have been able to extend this ministry out of Cameroon to more than fifteen countries.

The ministry is being recognised and producing more results. God needs available people to do his work.

God has helped me display resilience and courage. God is rewarding this work.

And through this many other women are waking up to their callings.

By God’s grace, I am the author of; When The Word is revealed, Divine Healing is Possible, Marriage Nugget Tips and Là Couronne magasin. Leaders have emerged from our School of Ministry, École De Conquérant d’Acquisition de Sagesse.

One of the things that kept me going amidst the storms is the conviction in my calling and the conviction that God is with me. This has helped me stay focused in the midst of challenges, persecutions and oppositions. None of these have broken me for good. Sometimes these arrows came from those I love, those I invested in.

Jesus had these moments when he said “if it is your will, take this cup from me,” and before he gave up the ghost he cried “why have you forsaken me.” His own disciples were not there to bear the pain with him.

I have come to this point several times, I have felt like giving up. Asking God whether this is what ministry as a woman is all about .

Another thing that kept me strong is the word of God. Also, I studied the stories of great women who had been in ministry and triumphed and learnt a lot. Learning of their challenges and seeing their strengths encouraged me.

My husband’s love for me has been a great strength as well. His love has been a pillar and foundation. His love and support not just to me but for my ministry. His knowledge and belief in me has kept me. Apart from the Holy Spirit my greatest partner, my husband, is that partner whose input I cannot explain, who can pray for me so well.

Today, when I see many women in ministry, not facing the kind of challenges that some of us faced seventeen, eighteen years ago, twenty, twenty-five years ago, I am grateful to God for helping me and other mothers at the time to stand the storm and raise the banner and build integrity as far as the women’s ministry is concerned. I see many daughters free from these persecutions and I give God the glory.

Also Women ministers do have issues with marriage and mothering as many are carried with many caskets of responsibilities and usually do not find it easy to manage those aspects.

Many Women in Ministry have it rough in their marriages, I must attest God gave me an angel of a husband.

Finances and gender is one of the main challenges Women face in the Ministry today. Those who have money are easily accepted by men, but those who do not are marginalised.

In all these, God has won all my battles.