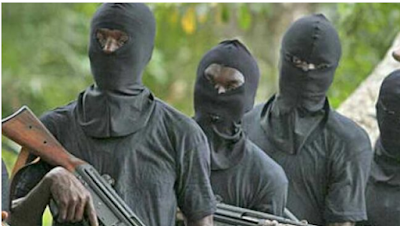 According to an eyewitness who pleaded anonymity, the gunmen invaded the private residence of the businessman around 1am on Wednesday morning.

The attackers, said to be 12 gunmen, reportedly came in a white Hilux van, two saloon cars and four motor bikes, and forcefully took the businessman away.

Kalos is said to be a popular dealer in electronic appliances at Sabon Gari market in Kano state.

“We noticed that the kidnappers parked their vehicles a distance away and came to the residence of the businessman. They shot sporadically into the air to scare away people. Nobody slept from that morning till daybreak,” the resident who witnessed the abduction said.

“However, a few minutes after locating the man’s residence, they took him away.”

Meanwhile, the gunmen were also said to have burnt a police van stationed at the front of the businessman’s residence after overpowering the security officers in the area.

Kiyawa, however, said that he is still gathering the details of the incident.

The incident comes hours after the abduction of a nursing mother and her baby, as well as the killing of a vigilante at Falgore town, Rogo local government area of Kano state, on Tuesday.