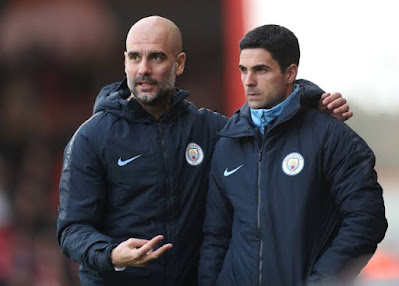 Manchester City head coach, Pep Guardiola, has sent a message of support to his former assistant, Mikel Arteta, as pressure continues to mount on the Arsenal manager.

Arteta is currently under intense pressure at Arsenal after the Gunners lost their last three Premier League matches against Wolves, Tottenham Hotspur and Burnley respectively.

Arteta’s side are currently in the 15th position on the Premier League table after 12 games.

However, speaking ahead of Arsenal’s Premier League clash with Southampton on Wednesday, Guardiola urged Arsenal’s hierarchy to have patience with Arteta, adding that his fellow compatriot would still turn things around at Emirates.

“Arsenal doesn’t have a better manager that leads this club – in this year and the next – that is better than him (Mikel Arteta),” Guardiola told a pre-match press conference ahead of Man City’s Premier League clash with West Brom on Tuesday night.

“I don’t have to give my support publicly because he has it and he knows that he has it. He’s one of the best managers I have ever worked with, of course, and seen directly.

“I am pretty sure he will turn over and will do it like everyone expects. But sometimes when a club comes from not a good period, sometimes it needs time.

“I would say [if I was] part of the board at Arsenal, I will not have any doubts about his quality and capacity to put Arsenal in a place like Arsenal deserves to be.”