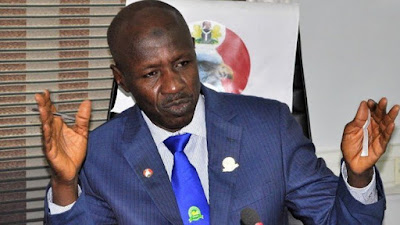 Ibrahim Magu, suspended acting chairman of the Economic and Financial Crimes Commission (EFCC), has presented himself before the Code of Conduct Bureau (CCB) in Abuja.

The CCB had summoned Magu over alleged failure to declare some of his assets.

In a letter dated November 2, 2020, CCB asked Magu “to come along with the certified true copies (CTC) of the following: Acknowledgement slips of all your assets declaration to the Code of Conduct Bureau since you joined public service. Copies of your appointment letter, acceptance, records of service and pay slips from January to May 2020. All documents of your landed properties, both developed and undeveloped”.

However, Magu through his lawyer, Wahab Shittu, had asked the CCB for an extension of time to enable him gain access to the relevant documents as required.

TheCable quoting a source reports that the suspended EFCC chairman was at CCB office in Abuja on Thursday.

The source said Magu could not be attended to as the CCB was having CCB was having its annual lecture with its theme “fighting corruption for socio-economic development”.

Consequently, Magu was said to have returned to the CCB on Friday, December 4 where he was questioned for hours.”

Asked to comment on Magu’s visit, Adetola Olusegun, spokesman of CCB, said: “I’m not in the position to speak about anything now.”

The CCB would prosecute Magu for allegedly failing to list dormant a bank account (First Bank) and a property in Port Harcourt, Rivers state, in his asset declaration form.