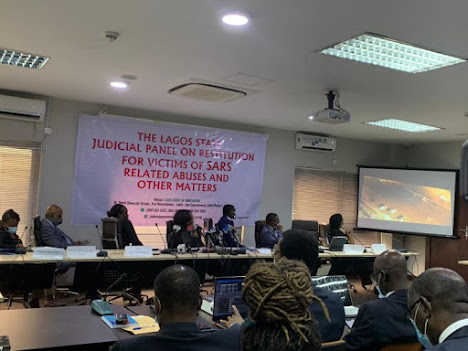 It was drama at the Lagos State Judicial Panel of Inquiry on Saturday as counsel to the Nigerian Police, J. I Ebosereme, presented a wrong witness during the hearing of a petition on police brutality by a 60-year-old man, Mr. Olajide Fowotade.

The petitioner claimed he lost two teeth and fainted when he was physically assaulted by one Inspector Ayo Odudu on March 11, 2017, at Ketu-Ikosi, while returning from work when appeared before the panel last month.

The Panel had subsequently adjourned the hearing of the petition to enable the police officer alleged to have been involved in brutalisation of Fowotade to appear before it and defend himself.

However, there was drama when the hearing of the petition resumed on Saturday and the supposed Inspector Ayo Odudu mounted the witness stand.

Fowotade wasted no time in telling the panel that the police officer was not the person who brutalized him.

While also confirming Fowotade’s assertion, the witness told the panel that he has never served at the Ketu Police division where the petitioner said the officer who assaulted him works.

On the contrary, Inspector Odudu said he is currently attached to Zone II, Onikan division.

He added that he has previously served in Abia State, Abuja and Ibadan where he was trained as a police officer.

Inspector Odudu said he has also served at Elere and Dopemu police stations in Lagos.

Subsequently, the Panel discharged the witness.

However, the Panel invited former Lagos Police Public Relations Officer, Dolapo Badmus who is now attached to the Provost Office of the Inspector-General of Police to appear before it.

The summon was based on Fowotade’s testimony that Badmus as the then Lagos State Police spokesperson intervened when he was brutalised by the elusive Inspector Odudu.

The petitioner said based on her intervention, a panel was set up by the police to  look into the allegations of brutality.

Fowotade, however,  said was he not informed about findings of the panel.

Justice Doris Okuwobi adjourned the hearing till January 15, 2021 to enable Badmus appear and testify before the panel.