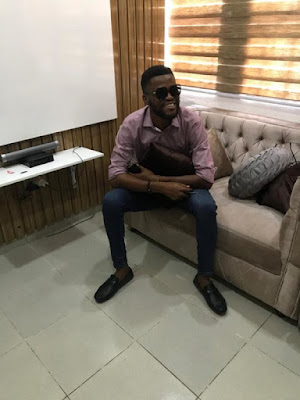 Austin Haruna, an Abuja-based Uber driver, who won a car alongside N3.5 million at the wedding of Deola Smart, says diligence in his transport job helped him gain entrance into the VIP event.

Deola, who is the daughter of Smart Adeyemi, the senator representing Kogi west senatorial district, got married in Abuja to Olusola Awujoola, a jeweller better known as Malivelihood.

Haruna had won a Lexus car and a monetary gift of N3.5 million in cash and pledges after a giveaway was staged.

In an interview with TheCable, the Uber driver said he won’t have gained access to the venue of the wedding event if not for the close relationship he had built with one of his clients, whom he explained is a Lagos-based bank manager.

Haruna noted that the client had asked him in when he attempted to wait outside the venue due to his diligent service.

“I have a client I usually pick. When he’s in town, I take him around to many activities before he goes back. He stays in Lagos. He’s a manager with Zenith. The groom is his friend. He was coming to the wedding,” the driver said.

“So he sent me money and I book a hotel for him, picked him from the airport and brought him back to the hotel. I waited for him and took him to the wedding venue. Ordinarily, I shouldn’t be able to enter that wedding. There’s an IV without which you won’t access the venue.

“When I dropped him off, I was about to wait for him in the car but he said “no”. He asked me why I would do that and requested that I followed him inside. He was of a simple personality despite his socio-economic class.”

On how he ended up winning the prize, Haruna said the bride and the groom initiated a giveaway at an after-party.

“The bride is Smart Adeyemi’s daughter. This banker was a friend to the groom. That was how I entered. There were VIPs like the vice president, the senate president, minister of FCT, and other senators were at the event,” he added.

“After everything, the friends of the bride and groom wanted to have an after-party. At a point, they said the groom wanted to do a giveaway. They needed 10 people. I was among those chosen.

“The MC said someone was going home with a Lexus car but only after we answer questions. Eight failed. The ninth answered correctly. I was the 10th. I got mine so we were both asked one more question each. That one failed.”

On how he would use the funds, Haruna, who identified himself as a pastor with one Omega Fire Ministries, said he will pay his tithe. He also said he would help some people “as much as possible” while investing in his business.

“I’m a businessman but I’m also a pastor with Omega Fire Ministries. Part of the plan is God first. I will definitely pay my tithe first after which I will help some persons as much as I can. I have other business ideas,” he said.

“Apart from Uber driving, I’ve also been an estate agent before now. I can further invest in adverts to make people patronize me. The agency work is enough if I’m truly being patronized. I don’t intend to sell the vehicle.

“It’s going to add to my agent work. I’m going to be meeting very privileged people. How I appear matters. I’m also into home interiors for which I do supplies. If a place is for sale at N50 million, the agent fee can be N5m or N2.5m.

“I intend to go into real estate in the future but I have to start somewhere. If I’m able to fully establish myself as an estate agent, I might quit driving because one can’t do many things at a time.

“I’ll encourage everyone out there. Whatever honest job you find yourself doing, do it well. If I wasn’t diligent in my Uber work, I wouldn’t meet the man who helped me gain access to that wedding.”

Haruna said he studied Banking and Finance at the University of Abuja where he graduated in 2019. He said that he had started working as a driver with Uber and Bolt, two e-hailing companies, while schooling at the same time.

“Diligence pays. I’ve been doing this job. It might not be my dream job but I’ve been doing it well. Most people I’ve driven can attest to it. That’s why this man was pleased with me. I gave him the best service in my ability,” he said.

“I’m supposed to go for NYSC, although the school has been on strike for almost a year now. I’m just a year past the NYSC age. I don’t know how it will happen. I schooled at the University of Abuja, studying Banking and Finance.

“Being a student when I started the job, it wasn’t easy because the university is far from town. I was mandated to make money for the car owner at the end of the week. They don’t take excuses. It has been a life of so much effort.”