Defection: My blood pressure has dropped after I made peace with PDP – Gov Umahi 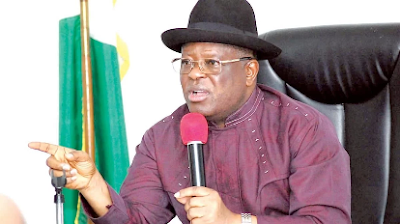 Ebonyi State Governor, Dave Umahi, has said that his decision to make peace with the leaders of the Peoples Democratic Party, PDP, in the State has lowered his blood pressure.

Following his defection to the All Progressives Congress, APC, the Governor entered a running battle with some elder statesmen in the State such as ex-Senate President, Anyim Pius Anyim, former Governor, Sam Egwu and many others.

But addressing some people in his hometown yesterday, the Governor said that peace has been restored through the intervention of the Catholic Bishop of Abakaliki diocese, the Christian Association of Nigeria, the state Founding Fathers Forum, Ohanaeze Ndigbo, among others.

“We should practice the Christianity we profess and this forgiveness has ensured that my blood pressure has dropped to 110/20 from 120/20,” he said.

However, Umahi warned that his decision to allow peace should not be mistaken for weakness, adding that, “The people should know that David is a man of war.”