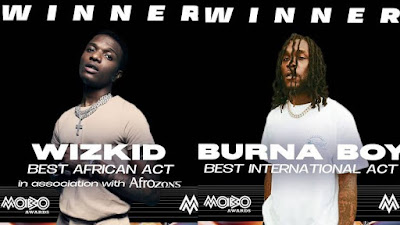 On November 24, 2020, nominations for the 2020 Music of Black Origin Awards were announced. Nigerian stars, Wizkid, Burna Boy Davido, Rema, Fireboy, Adekunle Gold and Tiwa Savage got nods at the event for the event which honours black music from all corners of the world.

The livestreamed event saw, which was hosted by Maya Jama and Chunkz and it featured performances by Headie One, Young T & Bugsey, Ms Banks, Kojey Radical and Shaybo, dancehall vocalist, Stylo G and soul singer,Tiana Major9.

London Rapper, Nines and R&B singer, Mahalia are the biggest winners at the 2020 MOBO awards on Wednesday night.

Nines won album of the year for Crabs in a Bucket, and best hip-hop act, while Mahalia won best female act and best R&B/soul act.

The MOBO awards returned for the first time since 2017 to celebrate music of black origin with a virtual ceremony, hosted by Maya Jama and Chunkz.

Album of the year: Nines – Crabs in a Bucket Best male act: Headie One

Video of the year: NSG – Lupita