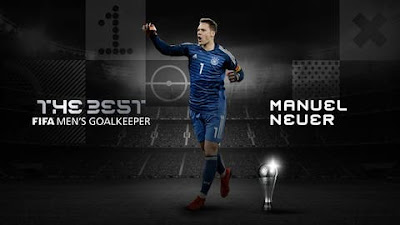 He defeated Alisson Becker and Jan Oblak to win the award.

Manuel Neuer has already won a host of individual awards in his glittering career, so this latest honour should come as no surprise.

But as most of the bigger prizes came in the first half of the past decade, some critics had begun whispering that he had peaked with that legendary contribution to Germany’s 2014 FIFA World Cup Brazil win.

Neuer, needless to say, has spent the past couple of years proving that he’s still the best sweeper-keeper in the business.

Such feats have led to Neuer becoming the fourth winner of The Best FIFA Men’s Goalkeeper Award.

Becker helped inspire his team to the FIFA Club World Cup and Premier League titles, conceding an average of less than a goal per game throughout.

Oblak layed in all 38 games as the team finished third in La Liga, and became the fastest goalkeeper to reach 100 clean sheets in the Spanish top flight.