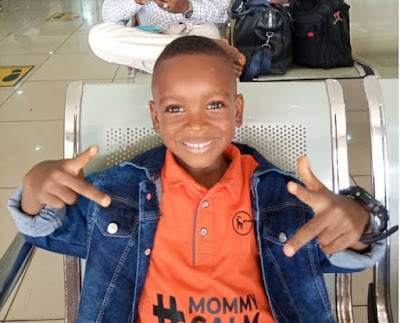 Oreofeoluwa Lawal-Babalola, a little boy who inspired the viral “mummy calm down” video, is set to make his Nollywood debut in a forthcoming project by Kunle Afolayan, a Nigerian filmmaker.

Afolayan took to his social media pages to break the news on Monday while providing insight into his next project.

According to him, the four-year-old boy will star in the yet-to-be-revealed project alongside other movie heavyweights including Eniola Badmus and Joke Muyiwa.

“This time last year, we started the preproduction of #Citationthemovie, and now we’re about to embark on an extraordinary journey with a group of new faces that we’ve never worked with before,” he wrote on Instagram.

Oreofeoluwa had become an instant sensation on social media platforms after a video went viral of him in tears from his mum’s scolding while confidently telling her to “calm down” and give him a “last chance”.

He would thereafter meet with Babajide Sanwo-Olu, Lagos governor, who commended his courage and composure while he also featured in several interviews with media houses.

The little boy had earlier revealed that he wants to be a police officer to help fight corruption in Nigeria — a development that elicited mixed reactions from the public at the time.

Afolayan’s next project is coming on the heels of the success recorded by ‘Citation‘, his last project, which starred Ibukun Awosika, chairman of First Bank of Nigeria (FBN) and Temi Otedola.