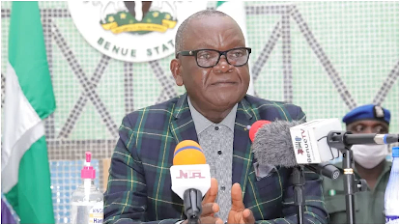 Governor Samuel Ortom of Benue State, Wednesday, observed that the Christmas Day message by Bishop Catholic Diocese of Sokoto, Matthew Hassan Kukah, gave a true reflection of the current situation in the country.

He, therefore, enjoined President Muhammadu Buhari to listen to words of wisdom and disregard sycophants who might tell him that all is well with the country.

Governor Ortom made his observation in a statement through his Chief Press Secretary, Terver Akase, lamented that it is unfair and repressive of the Federal Government’s reaction to the message of the cleric whom the government accused of stirring hatred against the President.

Governor Ortom enjoined the Federal Government not to muzzle what he called “patriotic Nigerians who are raising genuine concerns over the worsening security situation in the country because all is not well”.

Governor Ortom said that Bishop Kukah is a selfless Nigerian who only seeks to unite the nation and speaks his mind frankly on national issues calling on the government to serve the people.

He advised that instead of politicizing the views of the Bishop and castigating him, the Federal Government should take a second look at the things he raised in the message to avoid throwing the baby out with the bathwater.

The governor noted that Nigeria is practising democracy which guarantees the freedom of speech to all citizens and not a military regime which suppresses the right of the people to voice their opinions on challenges facing their country.

According to him, it is incumbent on the Federal Government to listen to the views of the people and take steps to address the worrisome security situation and other problems confronting the country rather than combatively engaging anyone who dares to hold an alternative opinion.

Governor Ortom opined that at this challenging time in the country’s history, the people expected their leaders to be tolerant, patient, humane, sincere, and always seek to address the issues that affect shared interests of citizens.

The governor Ortom noted that many Nigerians have given their views on the situation in the country, stressing that Bishop Kukah was not the first to say that hundreds of innocent Nigerians were being killed in cold blood by bandits, kidnappers, armed herdsmen and other terrorists.

The Governor noted that even under the worst dictatorships, courageous citizens expressed their views on issues of national interest, stating that Nigeria which is a democratic nation cannot be an exception.

He noted that whipping into silence, men and women of honour who speak against injustice would not take the country to greater heights, stressing that the government needs critics who make constructive observations and recommendations for it to work in the interest of the people.

Governor Ortom opined that great nations of the world got to their enviable heights by harnessing and utilizing ideas of their citizens, not by discouraging those who made bold submissions on the development of their countries.

The governor expressed his conviction in the unity, growth and potential of Nigeria to overcome its current economic and security challenges and live up the true meaning of its title as the Giant of Africa.