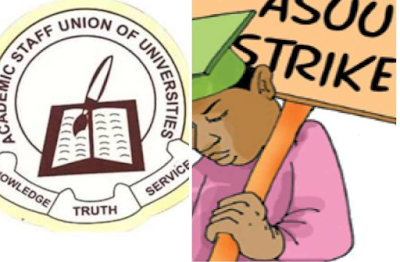 The Academic Staff Union of Universities (ASUU) says it has not suspended the ongoing industrial action.

The Chairman, ASUU University of Jos, Dr Lazarus Maigoro, disclosed this in an interview with NAN on Friday.

Maigoro explained that the union hasn’t signed any agreements with the Federal Government of Nigeria to call off the strike as being peddled in some quarters.

He said the Federal Government had promised to fulfil parts of the agreement that led to the lingering strike but had failed to do so till date.

Maigoro said, “It must be categorically stated here that ASUU never signed any agreement to suspend the strike but agreed on timelines for the government to implement certain aspects of the issues in contention.

“For instance, one of the issues agreed was that all the six to nine months withheld salaries and check-off dues of ASUU members will be released by December 9, but the date has passed, and nothing was done.

“The N40 billion earned academic allowances and N30 billion funding for revitalisation will also be released by December 11, among other issues, but till now, none has been fulfilled.

“The next thing is that we heard Dr Chris Ngige, the Minister of Labour and Employment, telling the public that ASUU agreed to suspend the strike.”

Maigoro rubbished claims by the minister, that the government has fulfilled its part of the agreement reached to enable the union to call off the industrial action.