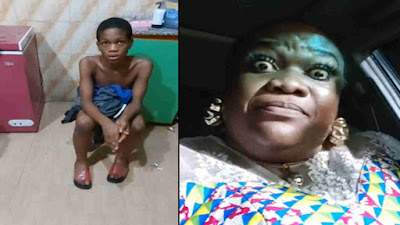 Deborah Okezie, the mother of the student of Deeper Life High School in Uyo, Akwa Ibom state, allegedly assaulted, has revealed that another parent told her that her child was also physically attacked.

Okezie brought the revelation to light in a recent Facebook live session while providing an update on her son’s health.

She, however, said the mother turned down her request to join in the campaign to unearth what transpired in the school because her husband, a pastor at the church, opposed the idea.

Okezie explained that her quest for justice was not just for her son but for other students of the Christian school who experienced similar situations but didn’t make the headlines.

“It’s not just about my child, it’s about the other children there. My son is the voice that had been heard of but I’m fighting for other children,” she said.

“One of the parents in the school sent me a text message and equally called me. She said her child came back with a broken hand after Mr. Akpan hit him.

“I then asked ‘why not join me to correct things?’ She replied no because her husband is a Deeper Life Pastor and he has said no to it. So, when you have things like this in place, there is little or nothing you can do.”

Okezie said it was unfortunate that while the school boasts of impressive academic standards, it ranks poorly when it comes to ensuring the well-being of the students.

TheCable Lifestyle earlier reported how Okezie claimed that her son was starved and molested by some senior students of the school after the principal had moved him to their dormitory for urinating on his bed.

The development had since sparked heated outrage, with many calling out the school’s management as well as the leadership of the Deeper Life Bible Church.

Amid the dust trailing Okezie’s revelation, the church had on Tuesday announced that it would address the public on the matter.