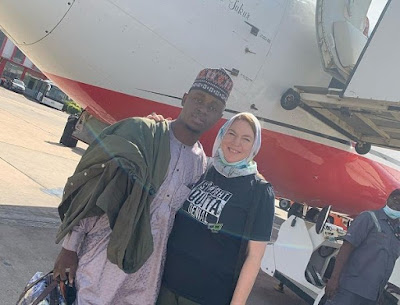 Suleiman Isah, a 26-year-old Kano-based man, and Janine Sanchez Reimann, a 46-year-old American woman, have departed Nigeria for the United States — about a week after their wedding.

Isah took to his Instagram page on Wednesday to share photos of himself and his new wife aboard a flight.

In one of the photos, the young man and Reimann were seen wearing facemasks while taking a selfie.

It is believed that the couple are headed to California, where Janine is based. 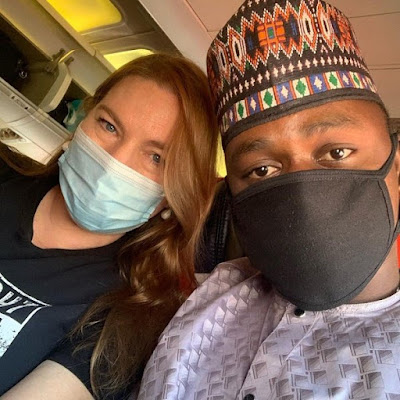 The mother of two had earlier revealed that the pair had agreed to settle down in the US immediately after their marriage.

Isah and Janine’s love journey began in 2019 when they both met on Instagram, after which they exchanged pictures and continued an online courtship that would eventually result in marriage.

NigerianEye had earlier reported how the lovebirds tied the knot at a decorated event in Kano last Sunday.

Janine, said to be a chef in Lindon, California, had during a visit to Nigeria in January, revealed that Isah’s sincerity endeared him to her.

Isah had also dismissed the age difference between them, arguing that “it’s even the Sunna of the Holy Prophet Muhammad, Peace be Upon Him, to marry a woman who is far older than you.”

He had added that he can’t love a Nigerian woman again following his experience with the American.