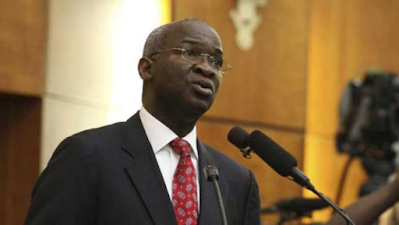 The Minister of Works and Housing, Mr Babatunde Fashola has directed Julius Berger, the contractor handling section one rehabilitation/reconstruction of the Lagos-Ibadan Expressway to speed up construction ahead of the Yuletide.

Fashola while inspecting the highway on Saturday, told the Julius Berger team after taking their project presentations to hurry construction ahead of the Yuletide.

He urged the contractors to liaise with the Federal Controllers of Works in Lagos and Ogun States towards fixing important sections to make the road motorable, safe and free of traffic congestion.

The minister also urged the firm to improve the quality and spread of signages and diversion signs around the construction zone and accelerate work towards Christmas celebration.

Fashola urged the contractors whose section spanned from Ojota in Lagos to Sagamu Interchange to make the construction wear a ‘human face’ that addressed hardship of road users.

“Understand that you do it for people and we want a sense of compassion. Plan with the controllers of Lagos and Ogun,” he said.

In their presentation the Managing Director, Julius Berger, Mr Lars Richters alongside his project manager, Mr Thomas Christl took turns to explain efforts to speed up construction in spite of reckless driving and high traffic volume.

The duo also explained progress recorded on  bridges and other construction on various sections of the highway.

The firm also raised issues of ‘Right of Way Compensations’ that were yet to be paid, thereby slowing down construction on some sections.

The firm lamented impatience of road users compounding gridlock on the highway.

“Here we are on good progress,” the project manager said.

The firm commended Fashola’s revolutionary achievements in the nation’s infrastructure development, and gave him an award on the project site.

Meanwhile, the Director, Federal Highways South West, Mr Adedamola Kuti also said that Julius Berger and  RCC working on section two of the highway, had both been directed to carry out palliatives ahead of yuletide to make the highway smooth.

While inspecting section two of the highway which spanned from Sagamu Interchange to Ibadan, the Federal Controller of Works In Ogun, Mr Umar Bakare explained details of construction works on their project site.

“So far the contractor has achieved 51.6 per cent in the construction of the road. They have completed over 43 kilometers on Lagos and Ibadan bound from change 101 + 717 to change 57 plus 750.

Bakare explained that the two carriageways had been completed to final layers within the section, adding that, other sections were on various levels of construction.

He assured that all sections would be made motorable on the project that had created over 400 direct jobs and over 1,450 people directly benefiting from the project.

He explained that over 20 million litres of diesel, over 30,000 tons of cement, over 1,000 tons of steel which had created indirect opportunities for citizens, adding that the contractor also took supplies of stones even though it had its own quarry.

He lamented activities of trucks blocking the Oghere side of the highway making the site inaccessible, but noted that a taskforce had been trying to curtail the excesses of the drivers causing gridlock.

The Managing Director of RCC, contractors on the project, Mr Nabeel Esawi, assured that the firm planned to open all diversions before Dec. 22 after making the road motorable.

He said that the road had been completed to final asphalt on some sections with 51 kilometers on the Ibadan bound and 44 on the Lagos bound carriageway.

“Our programme of work this dry season is to complete 43 kilometers for both sides to have at least from 43 to 103, 60 kilometers completed on both sides. That is our programme we want to achieve up to May 2021,” he said.

He called for patience during the construction of the road where highest quality standards were being adopted, adding that the road will be tolled upon completion.