Williams Uchemba reacts to gay allegation against him 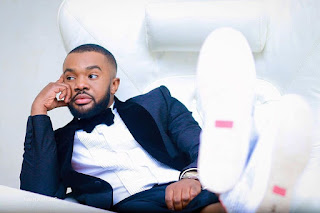 Nollywood actor, Williams Uchemba has reacted to allegation that he is gay.

The allegation was made by a Facebook user @Kosi Ugo who said Uchemba who recently got married was gay and his marriage is “dead on arrival”.

Reacting, Uchemba refuted the claims even as he threatened legal actions against the user.

He urged anyone with such notion to show evidence rather than chase clout on social media.

On his Facebook page, he wrote: “Let me clarify the following; For those of you calling my attention or linking me with the accusation in question, let me clearly state that I don’t know anyone by the name of Uche Williams.

“If anyone has any accusation against me, Williams Uche Mbah, they should feel free to make it.

“Anyone with an accusation against Williams Uche Mbah must ensure they have evidence to back it because if the accusation is false. I will respond with the full weight of every legal option at my disposal.

Uchemba noted that this is the last time he would address such reports.

“Usually, I ignore fools and slanderers but in this case, I am glad to make an exception.

“This is the last I will speak on this issue until any accusation has been made directly to me,” his post added. 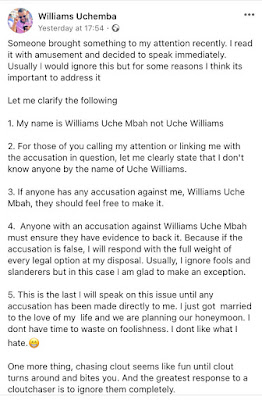