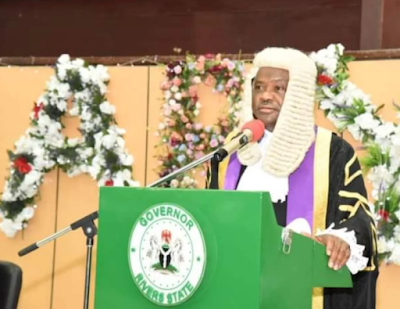 Rivers State Governor, Nyesom Wike, has faulted the position of Nigerian Bar Association, NBA, about the extra- judicial killing in Oyigbo Local Government Area of the state during the EndS SARS.

Governor Wike made the reaction during his address at the Special Court Session to mark the beginning of 2020-2021 legal year at the State Judiciary complex, Port Harcourt.

While expressing concern that people refused to speak about the innocent people and military personnel killed by hoodlums, Wike said there was nothing like extra-judicial killing in the area.

The Governor challenged the NBA to file their petition to the panel of inquiry investigating the activities of SARS in the state.

“How will the NBA, that is yet to make a formal submission to the Judicial Commission of Inquiry set up by the State to probe the atrocities of the Special Anti-Robbery Squad (SARS), will without evidence allege extrajudicial killings in Oyigbo.”

In her remarks, the Chief Judge, Justice Adama Iyaye Lamikanra, lauded Governor Wike, for providing the State judiciary the needed funds to ensure people have unhindered access to justice.