Wike reveals another PDP Governor will follow Umahi to APC 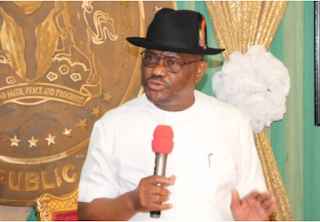 The Rivers State Governor, Nyesom Wike, has said another Peoples Democratic Party (PDP) Governor will follow Dave Umahi, the Governor of Ebonyi State, to the All Progressives Congress (APC).

Wike stated this while appearing on Channels Television’s ‘Politics Today’ programme on Wednesday.

“I can tell you there is one PDP governor that will leave. He is not leaving because of anything but he will come up with an excuse.

“The point is that these are the people who have been playing anti-party, who have been romancing with the APC in the night and coming to the PDP in the daytime.

“My problem with our party is that when you speak the truth, they will want to crucify you. I have raised this issue several times,” Wike said.

He, however, refused to disclose the name of the PDP Governor planning to jump ship, saying “I won’t tell you that. But you journalists know.”

Wike also claimed that Umahi, who recently defected to the APC, has always been disloyal to the PDP.