Why we seized passport of #EndSARS activist -Immigration 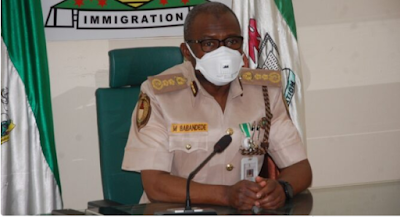 The Nigeria Immigration Service (NIS) says the passport of Modupe Odele, an #EndSARS advocate, was not seized as a result of the campaign against police brutality.

Odele, a legal practitioner and member of the Feminist Coalition, had narrated how NIS officials stopped her from travelling out of the country.

The Feminist Coalition, which is the promoter of the #EndSARS protest, raised about N147 million for the cause.

The lawyer, who was actively involved in the campaign, offered legal aid to persons who were arrested during the demonstration.

Speaking on Thursday, Sunday James, NIS spokesman, said the passport was seized as part of a routine border assignment.

He said whenever a restriction is placed on any individual, the immigration service is responsible for its enforcement.

James added that the action is unconnected to the #EndSARS protests.

“As an enforcement agency in charge of border management, if there is an order restricting anybody from entry into the country, we enforce it without any prejudice. This doesn’t have anything to do with EndSARS protest or an individual, it is a routine assignment,” NAN quoted him to have said.

The federal government has been accused of generating a no fly list of #EndSARS promoters — but it denied this claim.