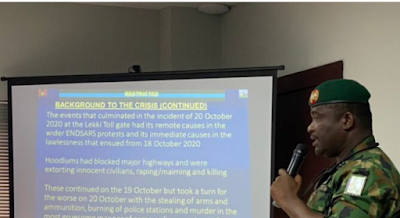 Ahmed Taiwo, commander of 81 division, army military intelligence brigade, says one of the hoodlums arrested during the #EndSARS crisis in Lagos had already installed doors and an air conditioner he looted.

He disclosed this on Saturday while appearing before the Lagos judicial panel of inquiry to testify on the role of the military in the Lekki tollgate shooting.

The #EndSARS protests turned violent as hoodlums hijacked the situation and looted facilities belonging to government and private individuals.

Taiwo said the army made a number of arrests in connection with the looting of properties in Lagos.

“The business district areas of Lagos were looted — Marina, Cash N’ Carry and the Nigerian Ports Authority (NPA). Vehicles were burnt and offices ransacked. They were looking for money. Once a protest lasts three days, hoodlums will begin to make active plans to penetrate,” he said.

“They burnt places like Shoprite, SPAR (Lekki). I was on ground and what hurt me most was that women, men and children… mothers were taking their children to loot.

“At SPAR (Lekki), I met looters looting. These looters, I’m talking about almost 5,000 people, even had the temerity to walk up to us with looted goods and telling us ‘all correct, sir.’

“All the looters were arrested and taken to 65 battalion. We have virtually all tribes represented among those arrested.

“In one case, the man had looted things required for a house — doors and AC — and by the time we went to arrest him, he had already installed them.

“Any looter that was not arrested within SPAR (Lekki) and Shoprite (Circle Mall) was arrested with looted items on the road. It was a free-for-all.”

Taiwo also noted that looted items recovered had been returned to their owners.

“We recovered looted items and the items were restored to the rightful owners who presented proof of ownership or receipts,” he added.