We couldn’t have gone out with catapults, says army on #EndSARS protest 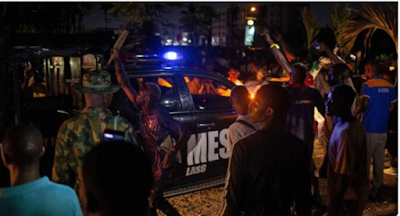 Ahmed Taiwo, a brigadier general and commander of 81 military intelligence brigade of the Nigerian Army, says soldiers deployed to protect SPAR outlet in Circle mall, Lekki, Lagos, could not have gone out with catapults.

Taiwo was responding to a question posed by Abiodun Owonikoko, counsel to the Lagos state government during cross examination.

Owonikoko had asked him if Babajide Sanwo-Olu, governor of Lagos, could give orders to the army.

The counsel asked the question after Taiwo said the army was unhappy that Sanwo-Olu denied inviting soldiers to restore order during the #EndSARS crisis.

“The owner of SPAR asked for intervention when his place was being looted on the 21st. He called me and begged. I have not met him or spoken to him, ” he said.

“Someone might have given him my phone number. He came on the phone and introduced himself to me. There was a situation developing there and the only request he made was I should kindly ensure that they do not burn the place.

“That same day, I got requests from different people. I deployed troops there. I went personally there from Shoprite to Lekki Circle mall. They(army) won’t have gone with catapults, would they?”

Taiwo added that even during phase 4 of internal security operations, the army is obligated to hand over alleged criminals to the police for prosecution.