VIDEO: ‘Life is for the living… spend if you have it’ — Melaye taunts critics on boat cruise 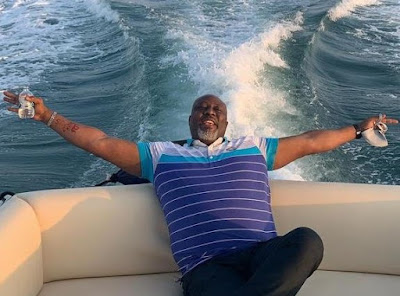 Dino Melaye, a former senator representing Kogi west, is a man whose love for luxury knows no bound, even when such craving has continued to attract heated backlash from his critics.

In yet another display of his flamboyant lifestyle, the former lawmaker has taken to social media to share a slew of video clips and photos from his latest adventure.

In one of the footages, Melaye is seen on a boat cruise in a serene environment, seated with his arms outstretched while savouring the beauty of nature.

In another clip, the erstwhile senator is seen singing about his penchant for enjoying himself at every moment with little or no worry about what happens next.

“I’ll enjoy myself to the fullest, l don’t care about what happens tomorrow…,” he could be heard singing in Yoruba.

In an ostensible justification of his slick lifestyle, Melaye argued that “life is for the living”, adding that those who “work hard” equally deserve to “play well.”

The ex-senator has made the headlines on numerous occasions over his knack for flaunting his wealth at intervals on social media — despite lamenting heavy bills earlier this year.

In September, Melaye had taken Dele Momodu, media personality, on a tour of his Abuja home, where he revealed several of his luxury collection.

He also added to his fleet of cars in October when he acquired the latest Lamborghini Aventador Roadstar convertible valued at $1 million (N460,000,000).