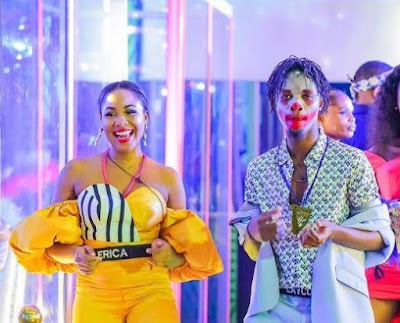 Laycon and Erica, former Big Brother Nigeria (BBNaija) housemates, have once again made the headlines after the latter appeared to have snubbed the former at a birthday party organised for Dorathy, their colleague.

Dorathy, who emerged runner-up to Laycon, the eventual winner of this year’s edition of the reality show, celebrated her 25th birthday in Lagos on Wednesday.

The event was graced by friends and well-wishers including former housemates of the ‘Lockdown’ house.

There was, however, a mild drama when Erica entered the event venue with fans cheering her.

Moment Erica showed up at Dorathy’s Birthday party, and Laycon couldn’t get his eyes off her! pic.twitter.com/5ijs5zjLar

But in footage from the event now making the rounds on social media, Erica appeared to have ignored Laycon, who was sitting close to Dorathy while the singer gazed steadily at her with a smile.

The development had since reignited the controversies between the duo after their face-off during the reality TV show that resulted in the eventual disqualification of Erica.

Recall that  Erica was disqualified from the show on three count charges of goading, threatening a housemate, and interfering with the production process after her verbal exchange with Laycon.

Several Nigerians have since taken to social media platforms, especially Twitter, to air their views on the matter.

Here are a few reactions:

This is how happy I slept and woke up happy...full of energy after my Erica⭐ ignored their winner with her full chest...their tears is my joy especially Naija PR blogger and Mandy aka Frodd's wife aka Swedish rat's tears is my joy😂😂😍....#EricaPepperDem pic.twitter.com/P7wMvfr0qD

It's actually Erica that snubbed laycon. 😂😂😂😂

What do we call that type of zone?

Laycon and Erica would soon start trending now. On top snubbing and who didn’t snub who matter. What kind of madness is this?

Imagine say na Erica was the one doing the staring. The narratives that would be flying around by now. Elites are too kind. Nollywood storylines would be flying by now. “She is now regretting not choosing him, she wished she chose him” Omo e be tinzzz thank god for airing🤣 pic.twitter.com/vkKNIvGXF7

“She wee regret not choosing him after weening the money” 🤣🤣🤣 unfortunately for them Na the same day she collect her own winner prize money. Regret kee you. #EricaOurWCW

Imagine what the narrative would have been if Laycon walked out of that party upon Erica’s appearance?? That (his)smile was from a heart with no hate, Y’all should just let bygone be gone. They all deserve a moment of peace together.

So because Laycon stared at someone's fav they're moving mad?? I'm seriously not understanding 😂 Laycon please stare all you want! God gave you eyes for a reason pic.twitter.com/JvdjBd8Mzh

That part of "Laycon is a youth ambassador so he has the right to stare at any youth" still dey burst my head💔💔💔😂😂😂😂 Icons ehnnn, cruising while shooting fire❤💡#LayconLookAtMe pic.twitter.com/GDb4XTBJqF

Imagine what the narrative would have been if Laycon walked out of that party upon Erica’s appearance?? That (his)smile was from a heart with no hate, Y’all should just let bygone be gone. They all deserve a moment of peace together.