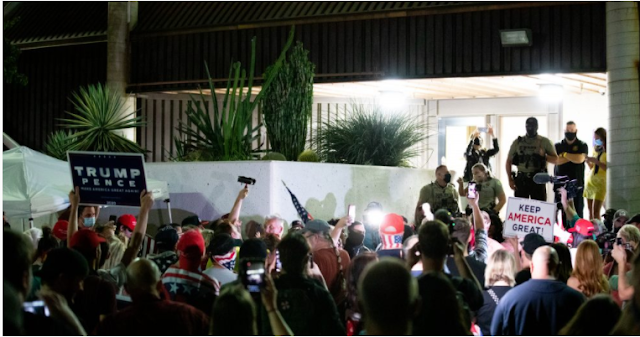 Supporters of United States President, Donald Trump, some of whom are suspected to be armed, have surrounded Maricopa County Election Department, Arizona, protesting the election.

A video of the protest broadcast on CNN, showed many of the protesters carrying Trump banners and placards, expressing their frustration over a projection by a cable network that the Democratic party would win the state’s 11 electoral college votes.

Former Vice-President Joe Biden, who is the Democratic candidate, is currently leading the race in Arizona albeit by a small percentage.

Trump’s campaign on election night disputed the calls that they lost the state, citing the outstanding amount of mail-in ballots that had yet to be counted.

“Who’s checking the mail-in votes?” a protester on Wednesday night could be heard saying over a loudspeaker, according to footage posted to Twitter by NBC News correspondent Gadi Schwartz.

“Democrats,” a woman answers. “Democrats are checking them.”

With 86 percent of the state reporting, Trump trailed Biden by just shy of 80,000 votes, according to The Associated Press.

As of late Wednesday night, the state was still tabulating more than 300,000 ballots, The Washington Post reported.

Trump had taken to social media on Wednesday claiming victory in the election and accusing the Democratic Party of trying to steal votes.