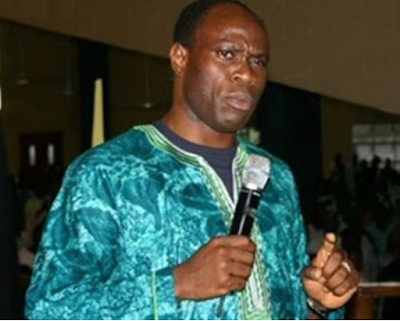 Taribo West, who is also a pastor predicted in a viral video that Trump would defeat Biden by a slim margin.

“Before the election in Edo State, I said Obaseki would win. Is that true? Did he win? Nobody said it anywhere. Nobody quoted me anywhere.

“Now, I want you to put this out the way I want it. Donald Trump will win the election by a slight split edge over Joe Biden. So, quote me and I want it to be out before time, the ex-football star was quoted as saying.

However, Biden won the US presidential election which is being challenged in court by Trump’s campaign.

West’s prophecy has since generated reactions from Nigerians on social media who are now mocking him.

Laugh before you go to bed 😂 pic.twitter.com/PqIn7Qi8RW

@OffcailMvp99 “Never bet with your last card bro, especially when it involves the big teams. This is common sense Pastor Taribo.”

@Adexsinzu “Baba scored a brace then he ended with an own goal and defeat.”

@_Fadaka “He wants to ride the social media wave but he drowned instead.”

@infonaija_247, “No, this cannot be Pastor Taribo West, former Super Eagles of Nigeria no-nonsense defender. This must be Taribo North.”

“The quest for fame and cheap popularity will make men pride in themselves,” tweeted @amablacknaija.

@mykkel3, “One thing I know about this wrong prophecy was that he wanted to glorify himself after the first two corrected ones, that was why he needed a camera to put it on social media…He forgot that he is not God.”

@Ope_Esther123 “Like it’s the level of confidence for me. He was so sure of himself. As if the Holy Spirit told him vividly. It is really the end time.”