US election 2020: What Biden needs to defeat Trump, be declared 46th president 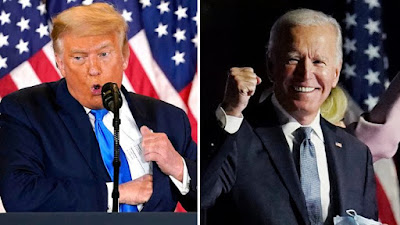 The Democratic Party candidate, Joe Biden, needs six more electoral votes to win the 2020 US presidential election, even as incumbent Donald Trump had demanded a stop to vote counting, the Daily Mail reports.

Trump has launched a lawsuit in Nevada, a city which could hand Biden the victory.

The Nevada lawsuit is similar to legal action the Trump campaign is launching in Michigan, Pennsylvania, and Georgia as Biden approaches the 270 electoral votes needed to win the presidency.

In Wisconsin, a state called for Biden, the campaign has requested a recount.

Trump has spent the past few days inside the White House, consulting his advisers about the race.

If state officials stop counting now and the election were called on the current tallies, Biden would be declared winner.

Trump needs to make up vote gaps in Arizona and Nevada in order to win the election, which ironically means he needs officials there to keep counting the ballots.