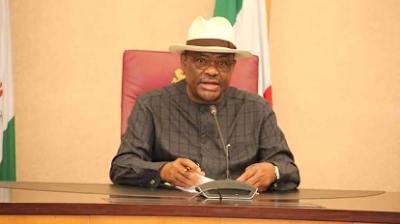 Rivers State Governor, Nyesom Wike, has said Atiku Abubakar’s choice of Peter Obi as his running mate in the 2019 election got his Ebonyi counterpart, Dave Umahi upset with the Peoples Democratic Party (PDP).

Wike said with Umahi’s defection to the All Progressives Congress (APC), he should be mindful of the political future of the South-East.

The governor, in a Live broadcast on Thursday, said Umahi has shown that he is an ungrateful man.

He recalled that after the 2018 PDP convention that produced Atiku, the former Vice President consulted widely and selected Obi, a former Anambra Governor.

He insisted that Umahi cannot talk of injustice when he practices injustice against the South-East zone by singly installing his two younger brothers; one as the PDP Zonal Vice Chairman and the other as the Deputy State Chairman.

“If he believes in equity and justice, will he be doing such? It is because he has planted these people that the State House of Assembly had such effrontery to give the National Working Committee (NWC) ultimatum to zone presidency to the East. Where does such a thing happen? No other party has done any zoning. You can imagine the level of selfishness,” he noted.

Wike dismissed Umahi’s comment that he made PDP what it is in the region as the financier of its activities.

He noted that such a claim suggests that Governors of Abia and Enugu States are not doing anything to ensure the success of the party in the zone.