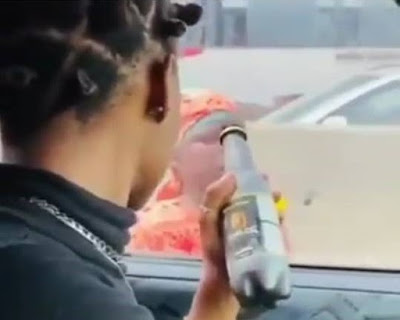 Brothers Keeper, a non-governmental organisation (NGO), has sacked Motara, a Twitter influencer, as its public relations officer (PRO) after a video wherein she was seen mocking a child beggar with a drink surfaced online.

In the less than one-minute video, the child beggar had approached the social media influencer, who is seen driving in traffic, to solicit for alms.

Motara, who was holding a bottle of drink, had asked the little girl if she cared for it to which she nodded in the affirmative.

But rather than giving the child beggar the drink, Motara, who had windows of her car up, had placed the bottle close to the child beggar’s mouth and continued with her journey.

Not giving up, the girl ran after her to get the drink. The Twitter influencer still did not give the little girl the drink but was seen laughing hysterically before gulping the drink while driving off.

The development had provoked outrage on social media platforms with many Nigerians calling her out over her action.

Reacting to the development in a Twitter thread on Sunday, Brothers Keeper said it had severed ties with Motara, explaining that her action was against the organisation’s ideals.

“Brotherskeeper is an organisation that believes in humanitarian services and not the contrary. Due to this, we regret to announce that @ladymotara is no longer a member of Brotherskeeper and has been suspended from her duty as the PRO henceforth,” it wrote.

Brotherskeeper is an organisation that believes in humanitarian services and not the contrary. Due to this, we regret to announce that @ladymotara is no longer a member of Brotherskeeper and has been suspended from her duty as the Pro henceforth. The reason for this decision https://t.co/oktMbMMsjz

“The reason for this decision stems from a viral video circulating on social media of our PRO making fun of a beggar in her car while driving and sipping her drink. This act goes contrary to what our great organization stands for and believes in; therefore, it has been condemned in all sincerity.

“She is hereby directed to handover every documents of the Brotherskeeper organisation in her custody. We wish her good luck in her endeavours. Brotherskeeper will never be in support of any degrading or dehumanising act. We stand for love, tolerance and much more.”

Motara had earlier apologised for the incident amid the backlash.

“I made the video yesterday cause stupidly I thought it was funny. I went ahead to foolishly post it on my whatsapp story and immediately I did a lot of people called me out on my stupidity and I deleted it cos I realized that my actions were extreme,” she had written in a now-deleted post.

“I’m sorry for mocking the girl and no amount of money I would have given her would have justified what I actually did. I realized that yesterday and it has resonated again today. Sorry doesn’t fix anything but I hope it can somehow lessen the blows of my stupidity.”