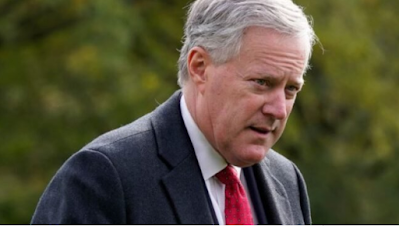 Mark Meadows, the White House chief of staff, has tested positive for the novel coronavirus.

This comes amidst ongoing electioneering activities in the US.

Meadows last appeared in the public on Wednesday without a mask while Donald Trump was delivering a speech and attempting to claim victory in the US election.

There are currently no details about his condition.

Barron Trump, the president’s son, also had the virus, as well as Robert O’Brien, the national security adviser.

Meadows was reported to have spent three nights at Walter Reed National Medical Center with Trump while he was recovering from COVID-19.

March Short, the chief of staff of the US vice president Mike Pence, and Kellyanne Conway, the former presidential adviser, were some of the presidential staff that had also tested positive.

In March, Boris Johnson, prime minister of the UK, tested positive for COVID-19 and had to be admitted early April, where he was in the intensive care unit. He survived.

Brazil’s president has tested for COVID-19 twice but recovered from the disease on both occasions.