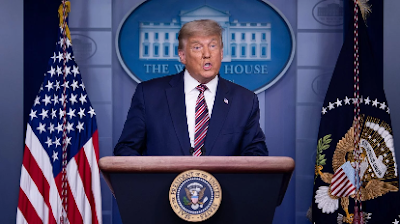 United States President, Donald Trump, on Thursday declared that he will exit the White House if the Electoral College confirms Joe Biden won the November 3 election.

Trump has not conceded and insists the Democrat is not the President-elect.

The latest comment is the closest to his acknowledgment of Biden’s victory and may be a sign of retreat.

Trump spoke at the White House after speaking to U.S. troops during the traditional Thanksgiving Day address, Reuters reports.

The American leader assured that if Biden is certified the election winner by the Electoral College, he will leave.

On Tuesday, Trump endorsed a poll which says 79 percent of his voters “believe election was stolen”.

He tweeted that evidence of “ballot fraud and more” are contained in his team’s lawsuit.

Biden, a former Senator, made history with the election win.