Trump attacks Biden - "Unlike how i handled COVID-19, You were a total disaster in handling H1N1 Swine Flu" 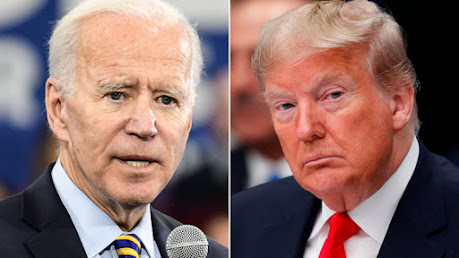 US President, Donald Trump has attacked President-elect, Joe Biden, saying he was a total disaster in handling the H1N1 Swine Flu.

Trump has refused to concede defeat to Biden in the US poll over a week after he had been declared winner of the poll.

The President has lost several legal battle mounted to tarnish Biden’s victory, as the President-elect remains focus on the task ahead.

Trump has presided over a country with the worst cases of Coronavirus in the world as US sets record on daily basis ramping up more infections.

The president’s attack on Biden came as the number of US coronavirus cases surpassed 12 million Saturday, an increase of more than 1 million cases in less than a week.

Yet the President has attacked Biden who was only a Vice President to Barrack Obama.

Asides calling Biden a disaster, Trump said the President-elect would never have produced a vaccine in record time and would do a terrible job of vaccine delivery.

”Joe Biden was a total disaster in handling the H1N1 Swine Flu, would never have produced a Vaccine in record time (years ahead of schedule), and would do a terrible job of Vaccine delivery – But doesn’t everybody already know that!” Trump tweeted.

He added that “The Fake News is not talking about the fact that “Covid” is running wild all over the World, not just in the U.S.

”I was at the Virtual G-20 meeting early this morning and the biggest subject was Covid. We will be healing fast, especially with our vaccines!”