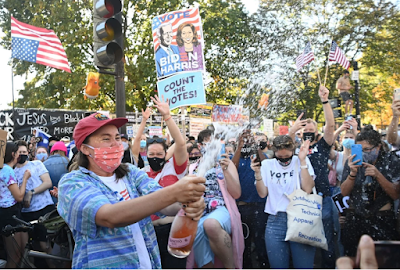 They gathered in front of the White House, hours after Joe Biden crossed the required number of electoral votes.

The gathering of mostly youths chanted a chorus in mockery of the American leader.

Trump has remained defiant despite Biden’s victory and congratulatory messages from several prominent individuals and countries around the world.

The Republican insists that the keenly contested presidential election is not over.

Trump accused Biden of rushing to “falsely pose as the winner”.

The President accused the media of helping him so that the “truth” won’t be “exposed”.

Trump disclosed that from Monday, his campaign will commence a legal action “to ensure election laws are fully upheld and the rightful winner is seated”.

Video of Americans in front of White House:

People in front of the White House singing, “you about to lose yo job.” pic.twitter.com/cDHgd8HJFB