The wizard of wizards – Ronaldinho reacts to Maradona’s death 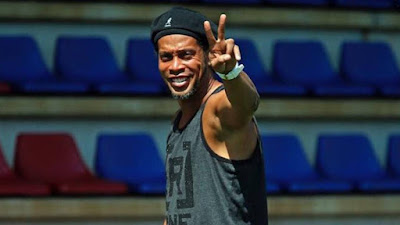 Brazil legend, Ronaldinho, has reacted to the death of Argentina legend, Diego Maradona.

Ronaldinho, who expressed sadness over the passing of Maradona, described the late football legend as “the wizard of wizards”.

According to him, Maradona was his idol, who inspired him during his career.

Maradona, who is widely considered the greatest footballer of all-time, died on Wednesday afternoon at the age of 60.

Maradona’s health has been in decline in the last few months and he passed away at his Buenos Aires home after suffering a cardiac arrest.

Reacting, Ronaldinho in a series of tweets via his Twitter handle, said: “My feelings to the family and to everyone who loves this genius.

“My friend, my idol, my number 10, thank you for every moment in your company, whether at games or at a simple dinner.

“Our conversations have always been very special, and I will cherish all moments of joy on the field together, where I was there to admire you and pay tribute to your greatness.

“It inspired me during my career and when I met you and played that 5 football, it was one of the best nights of my life. I was with my idols in the field.