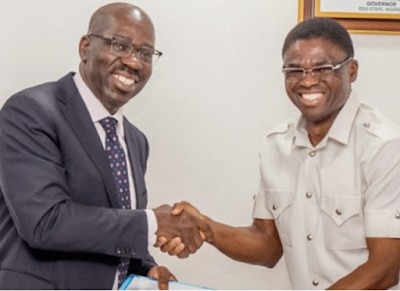 The governor, who announced the dissolution at a valedictory executive council session at the Government House in Benin City, expressed appreciation to the outgoing council members for their selfless service to the state.

Obaseki said: “Since I became governor, I didn’t sack any commissioner, but rather they sacked me by resigning from my cabinet. What is important in government are the core values of truth, justice and fairness.”

Obaseki urged former members of his cabinet to continue to work and support his administration.

Meanwhile, Obaseki and his deputy, Philip Shaibu, will be sworn into office for a second term on today (Thursday).

This was contained in a statement by the Special Adviser to the Governor on Media and Communication Strategy, Mr Crusoe Osagie, in Benin, on Wednesday.

He said, “The inauguration/swearing-in ceremony of Edo State Governor, Mr Godwin Obaseki and Deputy Governor, Comrade Philip Shaibu will hold on Thursday, November 12, at the Samuel Ogbemudia Stadium between 11am and 1pm prompt.

Due to the prevailing realities of the coronavirus pandemic, we would be having only 750 invited guests at the venue.