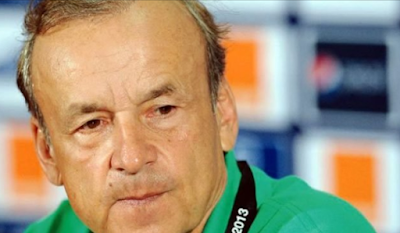 Gernot Rohr, Super Eagles technical adviser, may be in the dug-out for the last time after Nigeria’s second leg clash against Sierra Leone on Tuesday.

His fate might have been sealed on Friday night after a meeting was held following the Super Eagles shambolic performance which saw them throw away a four-goal lead to draw with Leone Stars at the Samuel Ogbemudia stadium, Benin city.

TheCable reports that a visibly disappointed Sunday Dare, minister of youth and sports development, had a meeting with Amaju Pinnick, president of the Nigeria Football Federation (NFF), and the Super Eagles at their Eterno Hotel after the game.

He demanded a technical review report on how the team threw away a four-goal advantage after starting like a house on fire.

“It will be a miracle if Rohr is not sacked after the reverse fixture in Freetown on Tuesday,” the source disclosed.

“The country of football talents cannot be disgraced like this,” a disappointed Dare told the meeting, according to the source.

Before Rohr’s contract extension talks, the minister was accused of trying to get another coach with a better technical depth.

The NFF handed the 67-year-old tactician a two-and-a-half-year contract extension on May 20, 2020.

Rohr led the Super Eagles to the 2018 FIFA World Cup.