Restructuring is ultimate solution to all cries of marginalisation in Nigeria – Fayemi, El-Rufai 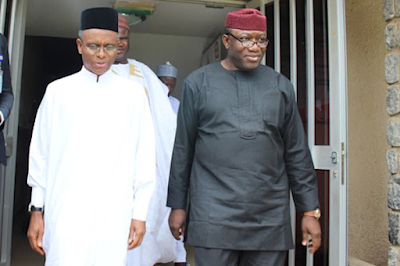 Ekiti State Governor, Dr Kayode Fayemi, and his Kaduna State counterpart, Mallam Nasir El-Rufai, have called for the devolution of powers to states.

Fayemi, who is the Chairman of the Nigeria Governors’ Forum, said power devolution was the solution to all the cries of marginalisation in the country.

He advocated a form of restructuring that would cement the unity of Nigerians, irrespective of their ethnic, religious, cultural and linguistic differences.

Also, El-Rufai said he was convinced that the restructuring of the current constitutional and statutory framework as proposed by the All Progressives Congress Committee on True Federalism presented a unique nation-building opportunity.

The governors spoke on Saturday at the 50th Anniversary of the Centre for Historical Documentation and Research (Arewa House) in Kaduna.

Presenting the keynote address at the event titled, ‘Unfinished greatness: Towards a more perfect union in Nigeria,’ Fayemi insisted that the 1914 amalgamation of the Northern and Southern Protectorates by the British colonialists was not a mistake as some had argued.

Rather, he explained that the country could use its diversity to achieve greatness if all Nigerians would utilise the inherent opportunities.

In a statement by his Chief Press Secretary, Olayinka Oyebode, titled, ‘Fayemi canvasses power devolution as the panacea for marginalisation…urges urgent action to make Nigeria work for the youth,’ the governor argued that issues of devolution of powers, decentralisation, restructuring and such other concepts should not be clothed in ethnic or regional toga but be used as an opportunity to reinvent the country to make it work well for everyone.

He said, “In essence, our desire to build a more perfect union should be anchored on the principle of devolution of powers – that is, re-allocation of powers and resources to the country’s federating units. The reasons for this are not far-fetched (sic).

“First, long years of military rule has produced an over-concentration of powers and resources at the centre to the detriment of the states. Two, the 1999 constitution, as has been argued by several observers, was hurriedly put together by the departing military authority and was not a product of sufficient inclusiveness.”

He also suggested an equitable revenue allocation formula that would speak to the federalism that the country had adopted and give more resources to states and local governments which carry more responsibilities.

According to him, a review of the sharing formulae to 43 per cent for states, 35 per cent to the federal and 23 per cent to the local governments will go a long way to devolve more responsibilities to constituent units and reduce the concentration of powers at the centre.

He cited two examples, namely the 2005 Constitutional Reform Conference convened by the President Olusegun Obasanjo administration, and the 2014 National Conference at the instance of President Goodluck Jonathan.

Fayemi explained that at the two conferences, “the delicate issue remains that of restructuring (often dubbed devolution of power, decentralisation, true federalism, etc.)”

“But for how long can we continue to run away from this issue and continue to pretend that somehow it would resolve itself someday?” he asked.

Fayemi also said going by the recent nationwide #EndSARS protests by the youths, it was high time the country’s leaders looked into ways to solve problems “which turned innocuous online protests over police brutality into an avenue to challenge perceived failures to meet demands for good governance.”

He said, “This is why anyone who holds a semblance of power or authority in this country should be deeply worried by the events of the past few weeks. What started as an innocuous online protest over police brutality snowballed before our very eyes into a mass movement that assumed more frightening dimensions.

“I am afraid that the bomb has started to tick, we must therefore act fast and start now to create systems that provide opportunities for our young people and make it possible for them to attain their God-given potential.”

Fayemi, who cited the works of authors Ben Okri and Uthman Dan Fodio in his lecture, concluded that there was an urgent need to address injustice if Nigerians truly wanted the system to work.

Also, El-Rufai, who is the Chairman of the APC Committee on True Federalism, said he was firmly convinced that restructuring the current constitutional and statutory framework on the lines proposed by the committee was a unique nation-building opportunity.

He said, “I am not aware of any significant constituency that is against the idea that states should exercise consequential powers, assume more responsibilities, and control resources to enable them to deliver better outcomes for those they govern.

“This will empower state governments to cease passing the buck to the President and the Federal Government when most of the problems our citizens face daily as a nation are and can be solved by improved and focused governance at the state level.

“It is time to make this sort of well-defined restructuring work, for the benefit of the people of this country.”

He added that the report of the APC Federalism Committee put in one place the recommendations and the legislative amendments to give life to a restructured polity.

He called on federal lawmakers and the National Assembly Ad-Hoc Committee on Constitutional Review to take advantage of the party’s report and initiate the constitutional and legislative amendments in either a piecemeal or comprehensive manner without further delay.