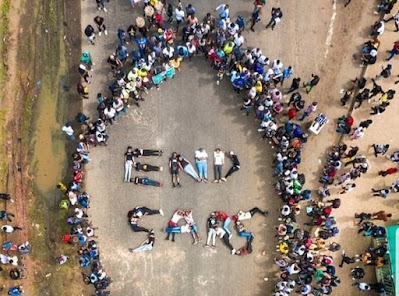 A cross section of Nigerians has threatened to protest after the court granted the request of the Central Bank of Nigeria to freeze the accounts of 19 individuals and a public affairs company linked to the #EndSARS protests.

NigerianEye reported that the request filed by the CBN in October 20 was granted by Justice Ahmed Mohammed of Federal High Court in Abuja.

The court order directed all head offices of Access Bank, Fidelity Bank, First Bank Nigeria, Guaranty Trust Bank, United Bank of Africa, and Zenith Bank, directed the banks to freeze all transactions on the 20 accounts on the list for a period of 180 days pending the outcome of investigation and inquiry conducted by CBN.

This has stirred reactions from Nigerians who blatantly condemned the Buhari-led adminstration for oppressing the youths.

Some Nigerians threatened to hit the streets again to protest oppression, even as others called for withdrawal of Rinu and other members from the judicial panel set up to investigate alleged cases of police brutality.

@Salman “ Central Bank just Freezed the bank accounts of Rinu, Pamilerin and some major youths who used their Bank accounts to receive Donations for the #EndSARS movement.For how long are we going to continue to live in fear of the people who are supposed to serve us?

@Ceogreg “ Let them keep it up,the are showing us the kinda leaders that they are and simply getting us prepared for 2023.we. need good plans to knock these rogues we call leaders out.werey ni gbogbo won.”

This tensioning and bullying is plenty.”

@DoctorEmto “ This should even make us hit the streets again and that panel can wait till they decide to be serious… There’s no need continuing with that panel.”

@FisayoSoyombo “ CBN has now become so idle that it’s most pressing mandate is chasing the court for an order to freeze the accounts of 19 individuals and a company that supported the #EndSARS movement. But ask them to strenghten the naira against the dollar and it’s mission impossible!

@Ayemojubar “ So @SavvyRinu bank account was frozen even while on judicial panel? This people have no respect for the future of this country.”

@Ozzyetomi “ So Rinu is serving on a SARS judiciary panel for Lagos state, borne of the #EndSARS protest, but *checks notes*, her accounts have been frozen for taking part in the protest in the first place?

@Natashagold “ Protest resumes Monday CBN HQ. Godwin Emefiele has started it, we will finish it.”

@Extrasheeter “ A second wave! A dogged, resilient second wave of #EndSarsProtests! The rogue regime of Muhammadu Buhari must be stopped!! Enough with the panel. Godwin Emefiele has been sent in. They just need to send soldiers to pick people at their homes before we understand it is bad already.”

@Feel_NN “ The police are killing us, the governors are hiding palliatives and stealing state funds, the military are killing and maltreating us, the CBN is freezing accounts..Oppression everywhere..We are tired of this country called Nigeria..#EndSARS

@Ogbenidipo “ The federal government and CBN should not be blocking accounts and dragging young people to court in one breath and asking young people to come sit down and talk in another. They need to rebuild confidence, trust, and allow this issue die down while ensuring justice for victims.

@a_taorix “ This country stinks. If I were to be Rinu Oduala,I would have withdrawn myself from the useless and fake judicial panel set up by the insensitive government and would have urged every youth representative to do the same. The judicial panel is a sham. How the hell will a democratic government freeze people’s account and seize people’s passport simply because they exercised their fundamental human right?

What is Nigeria turning into? Are we back to the Military Regime?

@Hernameisarik “ How many corrupt politicians accounts have they frozen and listed out to the public to see? Useless Government.”

@Tosho “I think it’s high time we shutdown Nigeria.let’s kuku fight the fight once and for all.”

@Williamsefe16 “ The Judicial panel is a distraction for two weeks nothing have been achieved.They just used it to wind down the #EndSarsProtests, I wish it can continue in the streets again.”