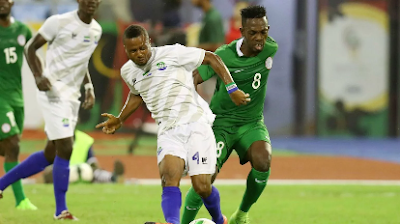 Nigeria faces a Sierra Leone side needing result as action returns on the African continent. The Super Eagles would be saddled with the ample task to beat Sierra Leone at home and nothing else would pacify soccer-Loving Nigerians.

Games are won with top performances while players actualize the gameplay and the instructions of their manager as planned or rehearsed in preparatory session for each game.

With Gernot Rohr evaluating his team selection amid the squad he’s got at the moment, certain kind of players are meant to lead by the examples on the pitch.

Following Nigeria’s build-up to the game, the three key players to watch ahead of this all-important AFCON qualifiers.

The Super Eagles attacker Osimhen would be expected to lead the Nigerian attack following the exit of Manchester United forward Odion Ighalo from the National team.

In his absence, the Eagles struggled to find fortune in front of goal as Paul Onuachu and Cyriel Dessers fired blank in the International friendly.

But with his return to the team coupled with the fear factor he provides, he is expected to lead the lines in aplomb.

The Sierra Leone defence must watch out for him in the fixtures as he is full of confidence having scored his side solitary goal in Napoli’s 0-1 win at Bologna in the Serie A.

The former Manchester City forward would be available for action bending any late alterations to the Super Eagles team ahead of the Sierra Leone games.

He’s been in good form of late for his Leicester City side having scored a brace in the Europa League last week (Thursday).

He scored Nigeria’s only goal against Tunisia with an expert finish, though he missed from the Penalty spot against the North Africans.

He would add firepower to Nigeria’s attack in transition. And he would be an amazing combo along with Victor Osimhen in the forward line pending whether Gernot Rohr would get his acts right on the matchday as Nigerians have always wondered.

The Super Eagles star was largely missed against Algeria and Tunisia. He seems irreplaceable as for now until Nigeria can get hold of the services of the duo of Ovie Ejaria (Reading FC) and Eberechi Eze (Crystal Palace).

His absence led to struggles in the midfield as Nigeria failed to flourish with the likes of Alex Iwobi and co in the central areas.

With Aribo now back from injury and been deployed in an advanced role by Liverpool legend, Steven Gerrard, he would be in the right frame of mind to execute his attacking duties in transition.

While his creativity could be helpful to the runs of Nigeria forward lines as Eagles quality personnel (Samuel Chukwueze, Chidera Ejuke) look to be put through by his wonderful inventions on the pitch.