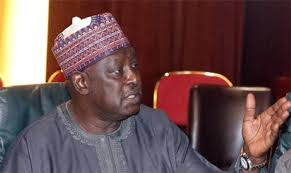 The Economic and Financial Crimes Commission (EFCC) has re-arraigned Babachir Lawal, a former secretary to the government of the federation (SGF), accused of N544 million fraud.

The commission rearraigned him before an Abuja high court on Monday, following the demise of Jude Okeke, the trial judge.

The ex-SGF was re-arraigned before Charles Agbaza, a new judge, alongside Hamidu Lawal, his brother, and five others.

Lawal, who was the SGF from 2015 to 2017, was suspended by President Muhammadu Buhari after a senate committee indicted him of alleged fraud.

The federal lawmakers had accused him of diverting public funds while handling grass cutting contracts.

Lawal and the other defendants, however, pleaded not guilty to the amended 10 counts of fraud during their re-arraignment.

The defence counsels subsequently prayed the court to allow their clients to remain on the bail which was granted them in 2019.

The judge granted their request and fixed January 20 for commencement of trial.

Lawal’s travails began on December 14, 2016, when the senate ad-hoc committee on “mounting humanitarian crisis in the north-east” indicted him of fraud in a contract awarded for the clearing of “invasive plant species” in Yobe state, through the Presidential Initiative on Northeast (PINE).

PINE, which was under Lawal, was at the time unable to account for N2.5 billion allocated to it for the alleviation of the IDPs’ suffering.

Lawal’s misdeed, according to the ad-hoc committee, included his alleged spending of more than N500 million to cut grass.

But his trial, which began in January 2019, has dragged since he was suspended.

The EFCC counsel once complained that most of the prosecuting witnesses who are from the office of the SGF were bent on frustrating the trial.