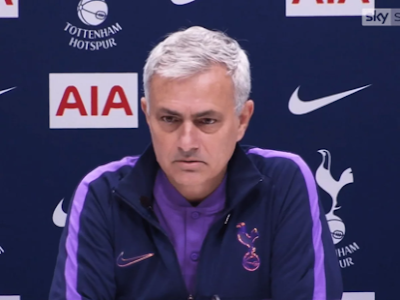 Tottenham Hotspur, Jose Mourinho, has insisted his team is not equipped to win the title despite moving back to the top of the Premier League.

Mourinho, speaking after Sunday’s 0-0 draw at Chelsea, branded Spurs as “ponies” in the championship race.

When Mourinho managed the Blues in 2014, he famously described his side as a “little horse” in the title race.

And despite Tottenham starting their second successive week at the top of the table, the Portuguese said: “We are not even in the race. We are not a horse.

“I don’t know what the word is. We are the small, young horses. We are just a pony.”

Mourinho however feels Chelsea and Liverpool are one of the biggest contenders to win the title.

“They [Chelsea] are one of the biggest contenders, there is no doubt about that.

“I believe that for them it is not a problem at all to be two points behind us and Liverpool, I think.

“They know how powerful they are and the squad that they have. And they know that this is a long season. They also know that Tottenham is not a candidate,” he said.