Marafa to Buni: We’ll chase you out if you don’t organise APC convention by December 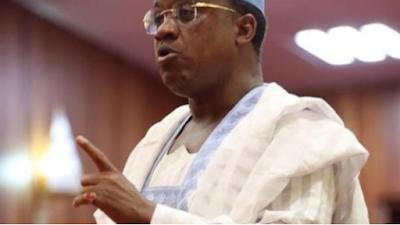 Buni’s committee was inaugurated in June after a leadership crisis ensued in the party.

“Don’t overstretch your luck, we are not afraid of you. Many of us are aware that your appointment is unconstitutional, [section 17(iv) of our party’s constitution is very clear]. We only kept quiet because of the respect we have for Mr President, and the belief that the party needs to open a new page,” he said.

“Be informed that any action you take outside your primary mandate of organising a convention that will usher in a new set of executives will be null, void and of no effect whatsoever. You have up to December to do the needful or we chase you out.

“Your state needs you more than the party, go and administer your state, you can’t be governor and chairman of APC at the same time it’s unconstitutional. You equally can’t accuse Chief Oshiomhole of any wrongdoing, because you were part and parcel of all the decisions he took. If there is any mess in APC today, you are part and parcel of it.

“We are eager to witness the emergence of a responsible leadership, a leadership we all can trust, a leadership that will carry every member, every section, every tribe along, not the type that leads by deceit and lies.”

Marafa asked Buni to focus on Yobe which he claims is in more crisis than the APC.

“Your state, Yobe, is in deeper crisis than APC. The state needs you more than the party, emulate your senior brother and colleague in Borno. Your agenda will collapse in a similar way the ones before yours collapsed,” he said.