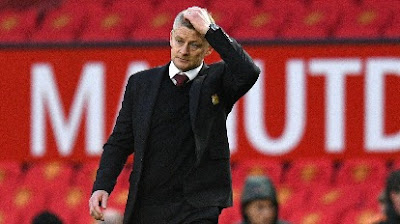 Van de Beek made his first Premier League start as the Red Devils came from behind to defeat Southampton 3-2 on Sunday.

However, the Dutchman is in a race to be fit for the PSG showdown, after picking up an ankle injury at St Mary’s.

The 23-year-old shrieked in pain after a strong challenge from James Ward-Prowse in the first half of Sunday’s clash.

Although he completed the full 90 minutes, he has since posted an image of his swollen ankle on Instagram, along with the caption ‘Welcome to the Premier League’.

Goalkeeper, David de Dea is also a doubt for the game.

The Spaniard had to be replaced by Dean Henderson at half-time, after he injured his knee trying to save Ward-Prowse’s free-kick.

Speaking to MUTV, Solskjaer described De Gea’s injury as “a knock just above the knee”, adding: “Hopefully he’ll be okay for Wednesday.”