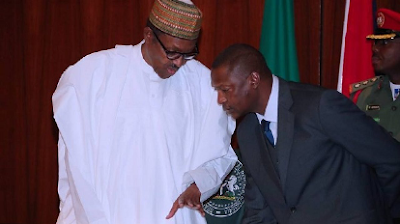 The Human Rights Writers Association of Nigeria, HURIWA, has alleged that Abubakar Malami, the Attorney General of the Federation and Minister of Justice has indicted President Muhammadu Buhari as an incompetent Commander-In-Chief.

HURIWA, a frontline activist group made the remark in response to claim that hoodlums in uniform may have attacked End SARS protesters at Lekki toll gate in Lagos State.

Some gunmen in military uniform had shot and allegedly killed some protesters in Lekki toll gate. The Nigerian Army, however, denied the involvement of soldiers.

Reacting to the outcry, Malami had said hoodlums parading in military uniform may have attacked the protesters.

The statement reads partly: “We condemn the Attorney General of the Federation, Abubakar Malami’s claim that hoodlums in Military uniforms may have attacked Lekki toll gate peaceful protesters.

“It’s an indictment on President Muhammadu Buhari as the Commander-In-Chief of the Armed Forces.

“We call on the President to sack Abubarkar Malami.”