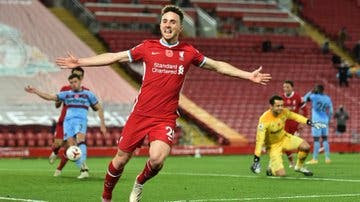 Liverpool were not derailed by an injury crisis as Jurgen Klopp’s men produced a dominant display to beat Leicester 3-0 and move level on points with Premier League leaders Tottenham.

Klopp was missing seven first-team regulars through injury and top scorer Mohamed Salah due to a positive coronavirus test, but Liverpool still swept aside a Leicester team who had started the weekend on top of the table.

Jonny Evans’s own goal was just reward for the Reds’ bright start before Diogo Jota set a record-breaking start to life at Anfield.

Kasper Schmeichel in the Leicester goal kept the score down as he made a series of second-half saves, notably from Sadio Mane and Jota, while Evans had a lucky escape as the post prevented him from scoring a second own goal.

Roberto Firmino thought he had been denied just his third league goal in 24 games when the Brazilian’s shot came back off the post and his follow-up was cleared by Marc Albrighton with just 10 millimetres of the ball not over the line.

But Firmino rounded off a brilliant team performance by rising highest to meet James Milner’s corner.

Another muscle injury suffered by Naby Keita was the only negative for Klopp on a night when his side showed they will not give up their title easily despite losing centre-backs Virgil van Dijk and Joe Gomez for the rest of the season.

Leicester boss Brendan Rodgers has now lost all three meetings against his former club and just like the previous meeting between the sides, which Liverpool won 4-0 in December, the Foxes were shown the gulf they have to bridge to become title contenders.

Harvey Barnes wasted one big opportunity for the visitors when he sliced wide Jamie Vardy’s cross at 1-0.

But the end to a six-game winning run sees Leicester fall back to fourth, two points off the top.

Liverpool paid tribute to former goalkeeper Ray Clemence, who died aged 72 after a long battle with prostate cancer this week, before kick-off.

Alisson Becker wore a replica of Clemence’s jersey from the 1981 European Cup final win over Real Madrid in the warm-up, while his former teammates Kenny Dalglish and Ian Rush paid their respects from the stands.

And two of Liverpool’s greatest ever players also got the chance to show their appreciation to the current crop, who surpassed a club record they set between 1978 and 1981, as Klopp’s men are now unbeaten in 64 league games at Anfield stretching back to April 2017.