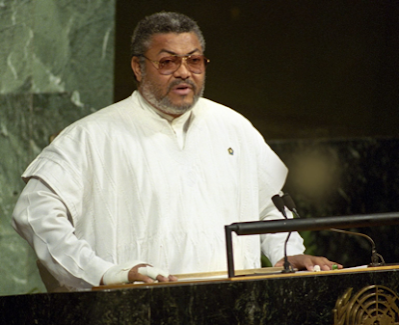 Nigerian socialite, Dele Momodu has described the death of former President of Ghana, Jerry Rawlings as a great loss to Africa.

The former president died on Thursday at Korle-Bu Teaching Hospital in Accra.

Rawlings led a military junta until 1992, and then served two terms as the elected President of Ghana.

Momodu who said he was devastated by the news of Rawlings death described the late Ghanaian leader as a great African.

His tweet read: “The saddest news of this year, my GOD, former PRESIDENT JERRY JOHN RAWLINGS of Ghana has passed on; I’m completely devasted! Good night, an African hero.

“Africa has lost one of her greatest heroes former PRESIDENT JERRY JOHN RAWLINGS (aka Junior Jesus).

Momodu added that Rawlings was an inspiration to him.

“For me, he was my personal inspiration. May his soul Rest In Peace,” his tweet added.