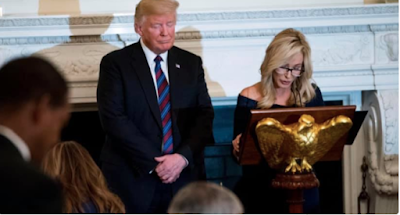 Speaking during a prayer session that held at the City of Destiny on Wednesday, White-Cain claimed the election is not political but a spiritual battle between the forces of good and evil.

Her prayers come amid claims by Trump that the election has been stolen by his opponents.

The evangelist further prayed against “every demonic win” that is not of the will of God.

“Anything that has been hijacked by media, by adverts, by political means… we break it right now. I secure righteousness in this election, in the White House,” White-Cain said.

“Anyone working in high levels of demonic conspiracies and they think they have things figured out right now, let it be exposed in the superior blood of Jesus Christ.

“We release the whirlwind to scatter those who come against the outcome of this election.”

White-Cain said angels are being dispatched from Africa and North America to see to Trump’s victory at the polls, adding that “God says it is done”.

Kayleigh McEnany, Trump’s press secretary, had also sought divine intervention to secure victory for the Republican candidate at the polls.