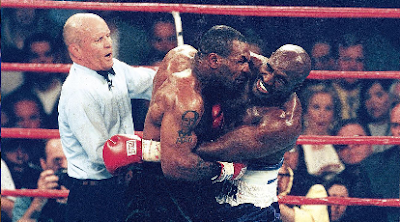 Mike Tyson has admitted he wanted to kill Evander Holyfield, but eventually chose to bit off a piece of his ear.

The former American boxing heavyweight was famously disqualified for biting off Holyfield’s ear in their 1997 rematch and was handed a 15-month ban.

He had also lost their first bout in 1996 after suffering an 11th-round stoppage.

In an interview with Fox News, he has now explained his anger with Holyfield’s use of the head in both fights.

The 54-year-old said: “I bit him because I wanted to kill him.

“I was really mad about my head being bumped and everything. I really lost consciousness of the whole fight. It took me out of my fight plan and everything.

“Listen, good or bad, I’m not going to let anyone take my glory.”

Tyson is all set for his first fight in 15 years against Roy Jones Jr next weekend.