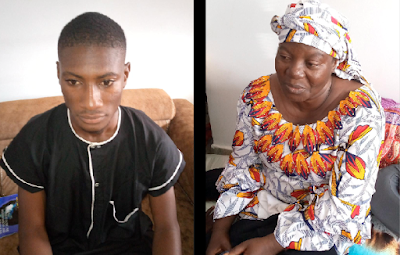 With tears streaming down his cheeks, 20 years old Samuel Shekwo, son of the assassinated APC Chairman in Nasarawa State, could not fathom why unknown gunmen would cut short his joy by sending his father into early grave.

The late Philip Shekwo was abducted by some gunmen last Saturday at his Lafia residence opposite Peace House on Kurikyo Road, Bukan Sidi in Lafia before his lifeless body was found the next day a few metres away from his house.

Narrating his father’s ordeal in an interview with our correspondent, Samuel recalled that the late politician was captured by his killers in the toilet after searching extensively for him in the house.

He said: “On Saturday night, we were all at home. My father went to play golf and came back in around 8 pm, and I went to the parlour to greet him. He had just finished eating and was telling us how the game went when I went into my room and left him in the parlour with others as they were watching the news on television.

“A few minutes before 10 pm, one of my course mates at Nasarawa State University called me and we were discussing the whole strike issue. Then from nowhere, I started hearing gunshots all over the house.

“I dropped my phone without even ending the call and rushed out of my room. I went into my parents’ room first to see whether they were fine, and I saw my father coming out from his room. I started switching off the lights because I noticed that we were under attack, so that they (attackers) would not be able to see through the house.

“I went to the parlour and was looking at them from the window. They were shooting from outside the fence. Then one of them jumped the fence into the house and used the butt of his gun to heat the gate’s padlock. He then rolled the gate to the end and the rest members of the gang started trooping in.

“When my father rushed to the palour, I followed him. I told him, ‘Daddy, you are not supposed to be here. These people are looking for you,’ He now told me that he was looking for his phone, and his phone was just by the side stool where he used to sit in the parlour.

“I took the phone and gave it to him, and I escorted him back to his room. He started making calls to security agencies but nobody responded.

“I was also making contacts to see if help could come. I called a friend, Mr Dominic Bako’s son, who is actually a close friend to my father and I am friends with his son too. So, I called him and he told his father that we were under attack.

“When I called him the second time, I could hear his father making contacts, saying that the Chairman was under attack.

“My cousins who were staying with us were also terrified. I told them to go back to their room, lie down and stay calm. But they were worried, so I took them to my room and asked them to lie on the floor while I went back to see what was happening.

“Throughout this period, my father was in his bedroom. But when I noticed that the pressure was much, I thought that they were armed robbers. So I went back to my room and started picking certain valid items and documents to hide. I also took my car key and laptop and hid them.

“Later on when I started hearing their voice, I locked my door and lay down together with my cousin sisters and we were just praying. Later on, I heard two gunshots in the direction of my parents’ room. I thought they had gained access into my parents’ room and I started crying and praying.

“When they got the security guard, they started beating him. We were hearing them from the room as they were asking him where is Oga. He told them that Oga had travelled but they said it is a lie, that Oga was around. They were actually beating him with their machetes because even from the sound, we could hear it.

“Later on, they asked what about the children. We heard he has a son. They were speaking in Hausa. From their ascent, you would know that they were Fulani, and they were not covering their faces.

“When they came to my room and noticed that it was luocked, they pushed the door and forced their way in. They saw us lying down together with my cousin sisters, because my blood sisters were not around.

“They now asked us to stand up. They asked the security guard, ‘Is this Oga’s son?’ He reluctantly nodded his head in the affirmative. Their leader now held me by my shirt and dragged me up. The other one now said since they couldn’t find my father, they should just go with me.

“They asked me to stand up and follow them; that my father must give them the money he was enjoying from the government. As they were about going out with me, one of them with a gun noticed that one of the rooms was locked, so their attention shifted to the place.

“They now detailed one of them to keep an eye on me and the security guard, that if I moved, he should shoot.

“They broke the door and entered but they did not see anybody. On their way out of the room, they decided to check the toilet and noticed that it was locked. That was when they forced their way into the toilet. There they saw him and my mum.

“Even when they had broken the toilet door, they still were not able to enter because my father was pushing from the back and they could not push their way in. Their leader now said since the door was not opening, they should shoot. One of them was about to shoot when my father released the toilet’s door and they got him.

“One thing that baffles me is that they did not manhandle him. They were not even sure if he was the one. They were calling him Moses. They assured us that they were not going to harm him; that it was just money they wanted. He was pleading with them, begging them. My mum too was begging and pleading with them, but they said there was no need begging, it was just money they wanted.

“They left with him and we were at home throughout that night, praying and hoping that they were going to call since they said it was money they wanted, only for us to get the sad news on Sunday afternoon that they had found his body.”

Samuel added: “Aside my mum, I think I was the closest person to my dad, so it is even affecting me more than my sisters. I’m not grieving today because my dad died; I am grieving because someone killed him.

“Already, he has prepared me for it. He told me so many things, though I feel with my age and everything, I’m not ready to take responsibilities. But I learnt courage and wisdom through my dad. I don’t need anybody to tell me about him.

“I know my dad so well. He used to tell me so many things. We travelled together most times and he took me to political activities because I actually told him I wanted to be a politician and he said he was going to support me in whatever I want to do. But he said I must make a difference if I want to be a politician.

“‘You must be a politician with a difference,’ those were his words to me. So I miss him more than anybody. But I learnt to stop crying because I know my dad is in heaven. He was a righteous man and someone that was close to God. I am praying to take over from him politically by God grace.”

A widow in agony

Seated in the parlour and surrounded by sympathisers at the residence of her late husband, Mrs Larai Shekwo gazed into the ceiling, murmuring some inaudible words as the reporter approached her.

Her eyes glistened wit imminent tears as she told the reporter that she spend 35 years in marriage with the late APC Chairman before his untimely death at the age of 62.

She said their marriage is blessed with five children, noting that her husband gave her a life that can best be describe as a fairly tale, and that she has no regrets whatsoever marrying him.

She said: “On that fateful night, around 10:30 pm, I left him in the parlour as he was watching the news and went into the bedroom to sleep. Shortly after, I started hearing gunshots. He ran and met me in the bedroom, saying armed robbers. But from the sound of the gun, I told him they were hired killers

“We started praying and he was making calls to the police for help. We went round the house and were running helter-skelter within the house, looking for where to hide for ourselves.

“They broke into our bedroom but they couldn’t find us. They later found us in the toilet and we were pleading with them. They went away with him. I wanted to go with him but they flung my hand.

“They were asking him whether he was Moses, and he said he was not Moses. They asked him are you the Chairman of the party, he said yes. So they went with him. We thought it was a normal kidnapping, so we were waiting for them to say what they needed.

“While they were going with him, they assured us that they were not going to harm him; that it was only money they wanted. We were thinking that by daybreak, we would hear from them. Unfortunately, we only found his dead body.

“I will miss him. I will not stop missing him till the end of the world.”

She said her husband’s untimely death is only a temporary separation as she hopes to see him again in the bosom of the Lord.

She said late Shekwo was a wonderful husband and father.

“He was my best friend. My marriage was a honeymoon cut short,” she added.