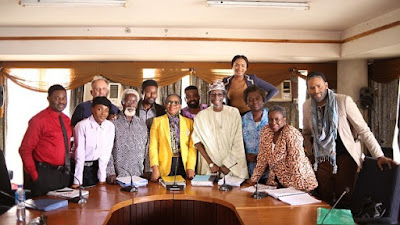 Kunle Afolayan, a Nigerian film producer and director, has narrated how Ibukun Awosika and Temi Otedola were enlisted among the cast for ‘Citation’, his latest movie.

Afolayan spoke on Monday when he appeared on Rubbin Minds, a programme on Channels TV, to discuss the making of the project and its success after release.

The movie producer said his interest in Awosika, chairman of First Bank of Nigeria (FBN), for the project was piqued after he saw her in his dream.

Afolayan revealed that after the dream, he approached Awosika with the latter accepting to feature on the project after meeting “all her terms” including her husband’s approval.

“When I have a project, a lot of names will come to mind. In her case, she was never in my initial plan. I was already talking to two veterans but I slept and saw her in my sleep,” he said.

“It was weird. I saw her on set and was giving her basic directions about the film. When I woke up, I called my partner that I saw her in this film. Then we pushed for it.

“It was tough but eventually, when she saw that we met all her terms, she said, “my husband gets my final approval”. Meanwhile, I have met her husband before on the plane to London which facilitated the arrangement.”

The movie producer also explained that he met Temi when she visited his fashion show in London during which she indicated her interest in acting.

Afolayan added that he picked her for the movie after assessing her level of confidence and willingness to work.

Since its release, ‘Citation’ has continued to pull the strings across the globe, topping charts and snagging positive reviews.

Temi was recently nominated for the 2020 edition of the Best of Nollywood (BON) Awards following her stint in the movie.