How Ibadan secondary school student was tricked, killed by those he trusted 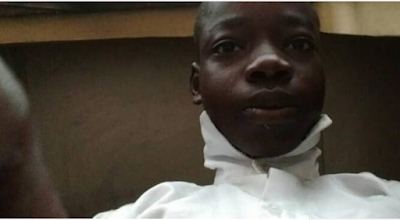 Quadri Olalekan, a student of Ifesowapo Community Secondary School in Ibadan, Oyo state capital, was looking forward to his 14th birthday before he was cut in his prime. As a result of the closure of schools due to COVID-19 lockdown, his parent allowed him to work under Biodun Owolabi, a bricklayer.

The families of Owolabi and Olalekan reside at Bodmas junction, Iyana Church area of Ibadan. Perhaps it was one of the factors that they considered before allowing Quadri to work under him. But unknowingly, they had signed him up for a journey of no return.

A day to his birthday, the mother asked him to do some chores and it was while doing this that Owolabi came calling. He had followed his boss who reportedly tricked him that there was a job to do. However, when the mother could not find him after several hours, she raised the alarm and a search began.

According to a family source, a resident of Bodmas junction told the search team that Olalekan was last seen with Owolabi. The team was said to have approached Owolabi who initially denied but confessed to killing the missing child after intense pressure.


Owolabi later took members of the community to the place where Olalekan was buried after life was snuffed out of him. Witnesses said the victim’s arm and his private organ were missing when the corpse was exhumed. He was said to have confessed that a cleric, residing in the community, was the one who orchestrated the murder.

“Owolabi is a son of a landlord in the area and he lives in his father’s house. He is around 21 years. The father is also a bricklayer. Owolabi and Alfa worked together and because schools were closed for a long time, the two engaged Quadri as labourer. Quadri was a student of Ifesowapo Community Secondary School,” said the witness who preferred anonymity.

“When it was discovered that the boy was missing, Owolabi was approached but he said he did not know where the boy was. When members of the community intervened, he said the boy had been killed and buried. He said he and the Alfa killed the boy and took parts of his body for ritual purposes. According to him, a popular baker and another individual in the area paid them to bring the body parts.

“He then took them to the place where the boy was buried. His remains were stuffed in a sack before being buried in a shallow grave. The arms were cut off while part of the buttock was also sliced off. The sack was dripping with blood when it was exhumed.

“When Alfa was apprehended, he denied knowing anything about it. His reaction triggered anger among the youths and members of the community and they set him on fire. When the houses of the killers were searched, we found charms and other dangerous weapons in their rooms. The belongings of the Alfa were also set ablaze.”

A relative of the mother who simply identified herself Bisi said Quadri was to mark his 14th birthday a day after he was killed and his mother had already bought clothes for the occasion.

“Quadri woke up in the morning and his mother asked him to go and wash plates. He was doing that when Owolabi approached him to help them in bricklaying work. They had been working together before,” she said.

“We expected him till evening but he did not return. We called Owolabi’s number several times but he did not pick the call. Then we went to his parents’ house where we saw him. He denied whereabouts of Quadri.

“He later took us to Alfa house. When Alfa saw us, he wanted to run away but he was caught by the people that followed us. He also denied knowing where Quadri. The youths in the area were angry so they forced his door open and searched his house. Charms and other fetish objects were found inside, including women pants.

“Owolabi later told us that Alfa strangulated the boy in a place called Agric bush. When we got there, we saw Quadri’s mutilated body and corpse of another boy there. Our son’s hands, eyes and buttock were cut off.

“His 14th birthday was on Sunday and his mother bought clothes for him to celebrate it. But he was killed a day before his birthday. His father works in Port Harcourt.”

Gbenga Fadeyi, public relations officer of Oyo police command, told TheCable through a text message that the victim’s family did not report the incident.